Telling stories was part of our families' activities.   Uncle Gene had more than his share.  One of his favorite was driving tanks.  He explained a number of techniques, with his hands doing most of the talking.  Fort Knox was the location, and hitting bumps with your teeth grinding about was often the focus.  Now I knew that Fort Knox was the place that all that gold was supposed to be held...but tanks...well not real sure about this.  At any rate, one of the patches I came to own, past down to me from Uncle Gene, was the following. 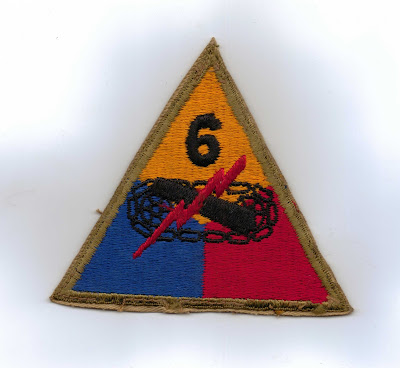 The 6th Armored Division it is.  Some years later, my study revealed that this division was deactivated after WWII.  However, it was reactivated during the Korean War and was used primarily as a training organization.  In 1957 it was again deactivated.  Hum...driving tanks it must have been.  Fort Knox...well I guess George Patton might have something to say about that!
Posted by The Jones Genealogist at 7:07 AM