Human growth and development are two of life's processes.  While still above ground, it is probably a good activity.  For most families, a child turning 13 is one of these special growth points.  Development is often a option.  Such is the case for my family.

My oldest grandson (Sam) is turning 13!  His growth and development has been amazing, and I am sure that there is much more to come.  Mom (my oldest daughter) requested all send to Sam some thoughts about this life event from our own experiences, and she would read them to Sam during his 13th Birthday Party.  This was mine :

"Hey Sam...Happy...Happy...Happy 13th Birthday. Bet you thought this day would never arrive, but here it is after 13 years of preparation.  I have enclosed a drawing you sent me some years back containing all the love your little heart could muster.  Now I am sending it back to you with all the love that this old, gray bearded heart can muster.  A special drawing it is to remind you that no matter what age you are and become...it is still O.K. to believe in dragons." 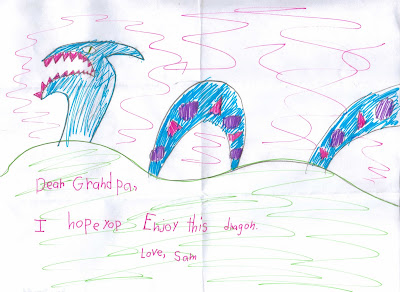 This drawing was sent some 5 years past, and I still enjoy this dragon.
Posted by The Jones Genealogist at 6:11 AM 1 comment:

To those who might enjoy a follow-up photograph to the one posted 2 November, 2015 titled "Just Another Day".  The photo in this post is shown below.  [This post has received 3265 visits.] 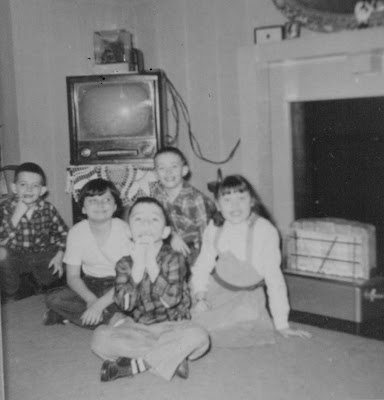 Evelyn Jean is seated just to my right side in the picture.  Of course yours truly is seated in front with both fingers in my mouth sharing this moment in time.

Now some years back the following photo was taken.  Just Evelyn Jean and I sharing this moment in time. 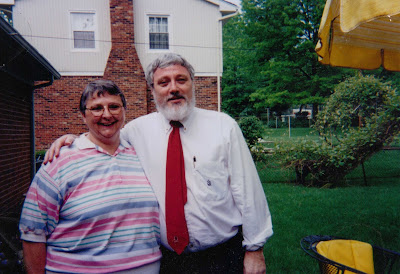 We are in the same position as shown in the first picture, and certainly haven't changed a bit.
[NOT!]  We had not seen one another for at least three decades, and enjoyed catching one another up on all the happenings important to us.  Just another day in our lives, but a little to old for tree climbing, rock throwing, snow ball fighting and the like...on this day in time, we were just family and friends.
Posted by The Jones Genealogist at 9:15 AM No comments:

Recent summer days here in Kentucky have been a string of hot, hot, and muggy 80 to 90 degree ovens.  Having baked a bit today, my mind drifted back to those winter school days when enough snow would fall leaving one free to produce those "snow angles" and "snow men", and a good snow ball fight when the neighborhood gang got going.

During these days, there was a special place just right for throwing snow balls at passing cars.  It was located at the north end of Vine Street where a cinder-block foundation once stood.  At one end it was about six feet high tapering down gradually some 10 feet away to a two block stack.  The wall ran parallel  to Washington Street where cars would travel east and west having to slow their speed due to the snow.  One could hide behind the six feet part, and when a car passed you could move down the wall as needed to let fly that well packed ball of ice.

On this particular snow day, solo flight was in order, and I was alone with several of those expertly prepared vehicles of ice.  A black 54 Ford appeared heading west.  Hum...a perfect target it was.  Now it took a certain amount of skill to time the release based upon the speed of the car, the height of the wall you had reached, and the projected angle of impact.  The car heading west was also an advantage since its back side would be more exposed as one moved down the wall.  Well here goes.

The snow ball arrived as planned, but little did I know that the back side window was opened.  Right through the back window it went.  What a perfect pitch it was.  Enjoying this moment came suddenly to an end when the 54 Ford stopped and a well built man exited his vehicle.  Where did that come from and boy is he going to get it seemed to be his objective.

RUN...I thought...RUN...but where?  My oversized rubber snow boots did not help a lot, and in a short period of time I was discovered and caught still holding one of those tightly packed balls of snow.

My memory fails me here, and I do not exactly recall the events which followed.  Still alive and breathing I must have talked my way around this big fella's hands... or, more likely he must have felt this puny little guy certainly could not have thrown such a strike as received through his back window.  Be that as it may, I remember that perfect pitch.

For those who might still be following this blog, you probably have noticed that the number and frequency of post have diminished this past year. [Hum...three the past six months?]  What's the deal.

The 3 B's I would like to call it = balance...bladder...and brain.  Since 2006, MS [multiple sclerosis] and I have been singing this duet.  Some days in tune, some days out of tune it is.  Most recently my balance has taken its turn in the out of tune chorus, and well just getting up and down from my favorite chairs [including my computer] has been an interesting experience.  My bladder continues its usual "no control" song, and my brain...who knows what is to come...where did I put that...?  Anyway, I just wanted you folks to know where I've been and the uncertainty of where I might be going.  May the blogs continue...MS and ME have a few duets yet to sing.
Posted by The Jones Genealogist at 7:38 AM 1 comment: 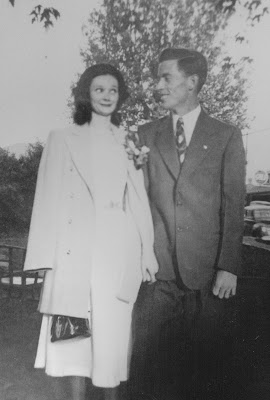 A newspaper article described the home event, and it can be read at the post of 22 August, 2010 titled: "Red Rosebuds".

Well, today is 70 years from this event.  Can you believe two folks making it together along the roads of life for this many years.  Not many I guess.  A Happy Anniversary  to you guys from the family who loves you... two sons and their wives...seven grandchildren and their husbands and wives...and seven great grandchildren with the marriages yet to come.  Your example and love still leads this family tree.
Posted by The Jones Genealogist at 5:12 AM 2 comments:

Not so long ago, quilts were part of the family.  They were often handed down from mother to daughter to keep the memories that they held alive.  During my growing up days in the 1950's, this quilting stuff was generally left up to the maternal side.  [Do not remember any males involved in this family activity.]  The females of the family would come together to quilt, showing the younger the secrets of the stitch, organizing the pieces, layers, materials, etc., etc., all joining together to make a new bed cover for the one who needs it.  For my Ewen side of the family it was often needed since 12 members of bothers and sisters had many to cover on those cold evenings before furnaces and central air.  Such is the quilt shown: 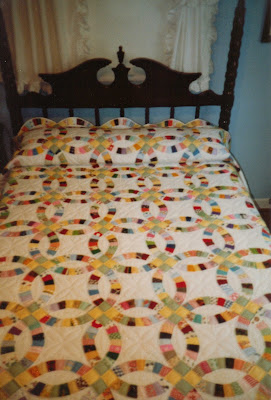 It usually covered a good size group.  The pattern became a distinct work of art, in many cases taking it own name.  A closer picture is shown. 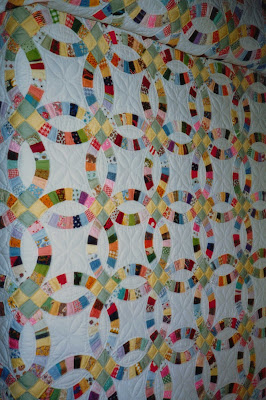 Just imagine the number of threads woven.   Each little piece of cloth being shaped and placed in the pattern selected by the group.  A final picture is shown. 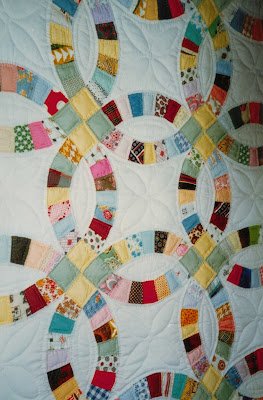 Overlapping circles joined together by a common bond.  A family quilted together, indeed it is.
Posted by The Jones Genealogist at 6:31 AM 3 comments: