Hours of Our Days

Passing another year above ground is a good thing. [Just passed 61 years!] Most of our ancestors are below ground and that is the way it is supposed to be. Life, death... time passes... one generation to the next.

This past birthday was special with daughters and grandsons making special trips to help celebrate this passing. My youngest daughter left her words on a card :

"I am thankful for how God imagined our family into being... how he saw us singing in Wales, roughing it in the wilderness, striving to raise our families in love & wisdom. Generations after generation he knew the boarders of our land and the hours of our days. Thank you for sharing these days & these boarders with me. I am better because of it. I love you dearly, Ellen"

Oh yes, thank you Ellen. I love you dearly. How important are the hours of our days.
Posted by The Jones Genealogist at 7:50 AM No comments: 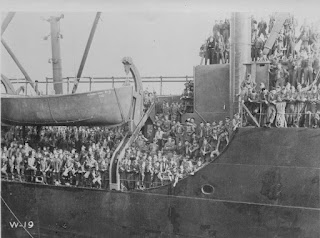 I can't imagine how long it would have taken to line all these folks along the side of the ship. Seven to eight rows deeps, and running the length of the entire ship. It would certainly seem that most of the folks wanted to get their picture taken. Something about that... having your picture taken. Especially after returning home, to remember the voyage.

No names, only faces are shown. Lines and lines of faces that have seen life in a setting unknown to most of us. 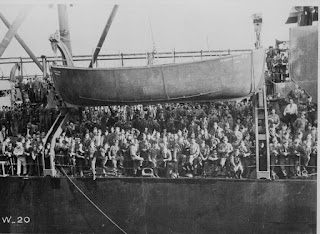 Here we are. The last two pictures of a long series of photographs that records the faces of these folks in 1946.


The end for some...perhaps the beginning for others.
Posted by The Jones Genealogist at 7:42 AM 1 comment: 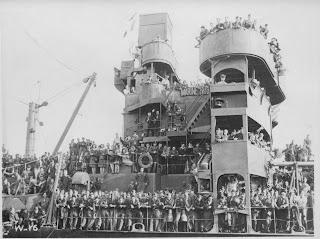 Lots of folks, and lots of pictures. Not sure how you would be able to pick yourself out of the crowd. Seems like you would have to remember some kind of land mark or structure, and place yourself at the front, middle, or end of the ship.


How about a lifeboat? Can you imagine thinking, I will know where I am in this picture because I am standing on a lifeboat. 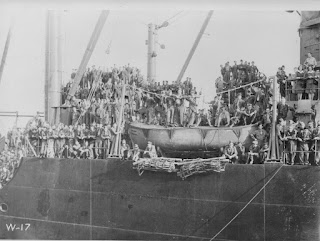 At least four guys seem to be standing on the lifeboat in picture 17. I wonder how they got up there? At least they would know where to look among all these pictures. 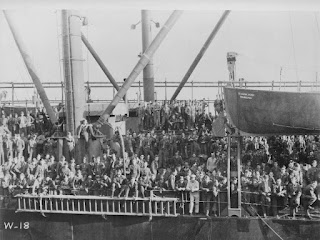 Wow, standing on a lifeboat. Perhaps, the whole ship was the lifeboat.
Posted by The Jones Genealogist at 7:57 AM No comments: 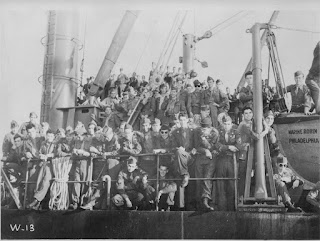 Rows and rows of folks... it keeps going. Most have the standard military hat showing. A few have sun glasses.

Some are squatting , some are hanging on to any thing that will support them. What a crew it is. 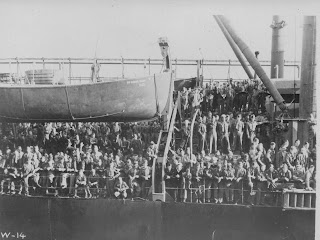 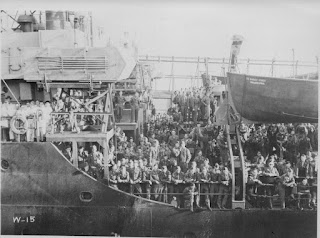 All line up in rows...on down the line.
Posted by The Jones Genealogist at 7:17 AM 1 comment: 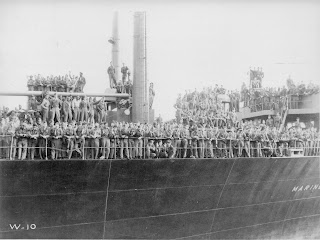 Following orders must have been part of the game plan. Just imagine what it would have taken to get all the hundreds and hundreds of folks all lined up in a row. In some places it appears to be six to seven rows deep. "Stem to Stern" or what ever the right term is suppose to be.

Cooperation would have been paramount! Just imagine if a few of the folks said, "Man...not me... I'm not going to the side and stand there!" 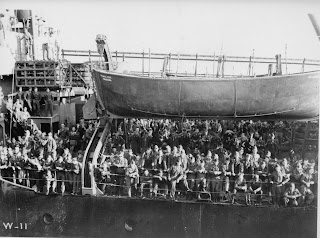 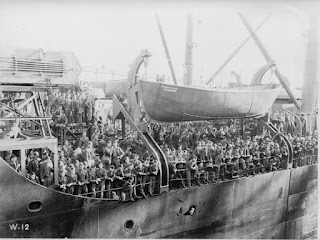 What would our world be like today if these folks had not worked together to bring to close the issues of the day... all together.... all on this ship... all lined up.
Posted by The Jones Genealogist at 8:21 AM No comments: 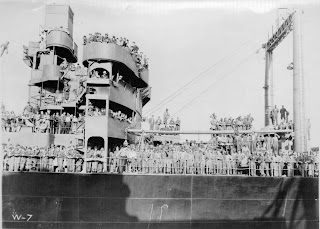 Moving on down the ship at a closer range, one can see the folks lined up along the railings. Lots and lots of them are seen. Anyone know how many?

The "bridge" [control center] is packed top to bottom and you would wonder how anyone had control of the ship. It was certainly exciting times for all those aboard.

The number of life boats seem to be few and far between. 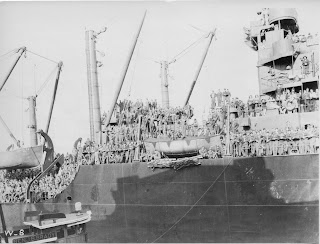 I guess after all these folks have been through, life boats were not top priority. 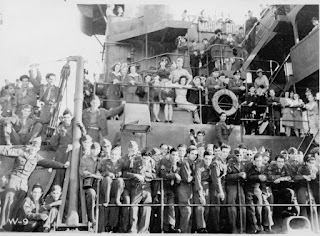 Frame 9 shows at least 12 women present on this day. Can you imagine what this must have been like for these women among all these men?

Does anyone know the story associated with these women among all these men? Please post.

Who would have thought, these women "among 'um".
Posted by The Jones Genealogist at 7:26 AM 1 comment: 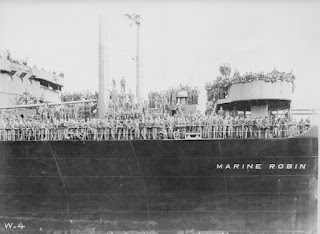 It would certainly be difficult to estimate the number of individuals traveling on the Marine Robin. The whole number seems to be lined up along the railings and ship sides. I guess they all wanted to see the skyline of New York City on that docking day.

Starting at the front (bow), the men [and some women yet to be seen!] must have been told to come on deck for the series of pictures.

Numbers 4 - 6 are shown, and I guess they are taken at various distances from the dock. 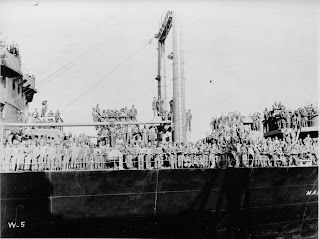 Anyone have additional information and stories regarding this ship please post in the comment section. Hundreds and hundreds of men and some women, certainly a boat load. 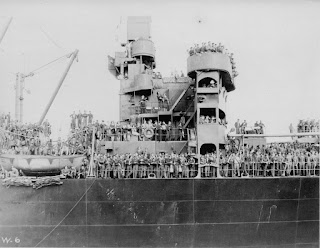 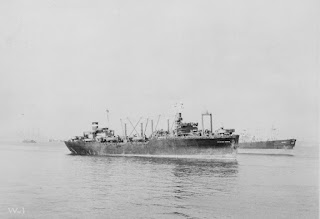 A reader of this blog has asked for help with information regarding the "Marine Robin". He tells me that his grandfather returned on this ship in 1945 from Germany. This reader has wanted to build a ship model in honor of his grandfather. He asked for any information regarding the plans, color, dates, etc...etc. on the Marine Robin. My Dad also returned from Germany on this ship, and I am sure that there are other "relatives" of this adventure that would also share an interest.

I have copies [1-20] of the pictures taken of this ship in 1946. As the troop ships would arrive in harbor, a photographer would take a series of pictures of the docking with hopes of each returnee buying the copies. My Dad was one. They are numbered 1 - 20 and I will try and copy the pictures in sequence as they are numbered. 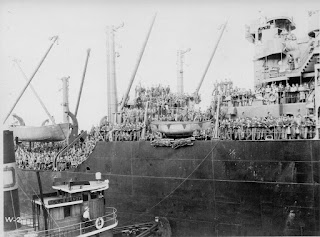 Anyone with information regarding this ship please post or give the information you have regarding your ancestor. My reader tells me that he has not found a blueprint of the ship or any record of this ship. Does anyone know if such a blueprint exists? My Dad states that it was called a "Liberty" ship. 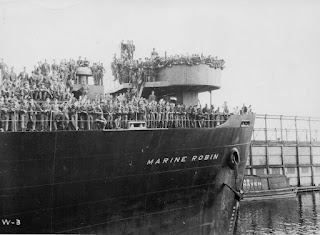 My Dad tells me that he remembers seeing a "lot of rust everywhere", and does not recall a specific color pattern. His "bunk" was in the back [stern] of the ship, and he remembers hearing the sound of the propellers going at all times. The beds were metal bunk beds stacked floor to ceiling. He volunteered for K.P. [kitchen police] so that he could eat at all time in order to keep the "sea sickness" under control. I asked what they did for the bath room, but he does not remember. I can't imagine all these folks not going to the "head"! He does remember seeing folks "throw-up" in their beef stew which was served frequently.

The next several post will give the pictures in order of the docking that day in 1946. Dad says, that the most impressive thing was seeing the Statue of Liberty and feeling that he was finally home.
Posted by The Jones Genealogist at 7:31 AM 1 comment:

The Naming of Danville, KY 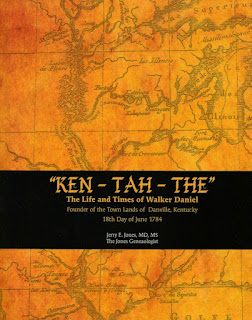 Beyond the Allegheny Mountains, the colony of Virginia had laid formal claim to the "dark and bloody ground" with the establishment of Fincastle County, VA in 1772. Under the British government, this claim followed the existing land laws. All this was to change at the start of the Revolutionary War. The Virginia legislature change the name to Kentucky Co., VA. A bill was signed by Patrick Henry [1st governor of VA] on December 7, 1776, to become law effective December 31, 1776. A new beginning it was.

As the war for independence was moving towards its final days, the Virginia assembly was attempting to exert its "controlling power" for the better management of the civil and military affairs of the "District of Kentucky". [May 6, 1782] A supreme court of "...judicature of original jurisdiction..." was organized for the new defined district with a man name Walker Daniel appointed as the first Attorney General. This Walker Daniel presented his commission to this newly organized court on March 4, 1783. It was here that he and John May were "...to make choice of proper and safe place for holding their terms, somewhere in the neighborhood of John Crow's Station...".

On June 18, 1784, Walker Daniel obtained an "Indenture"[deed] from John Crow for 76 acres of land. It is here that the DANVILLE is first used in the pages of history, as the "town lands of Danville". Unfortunately , on August 12, 1784, Walker Daniel was killed. His business partner Issac Hite, took responsibility for building the first courthouse, and jail for this new district court.

"Petition of inhabitants of Danville and others, proprietors of the lots therein, that Walker Daniel, late deceased, in his lifetime purchased of John Crow 76 acres for the purpose of erecting a town. Walker proceeded to lay off a part of the land into lots and streets and disposed of some of the lots. Since his death Robert Daniel the elder brother and heir at law of Walker Daniel laid the remainder of the land off into lots and streets and disposed of them."

In response to this petition, the General Assembly on December 4, 1787, approved the town of Danville.

"... Be it therefore enacted, That the lots and streets so as aforesaid laid off, shall be, and they are hereby established a town, by the name of Danville...".

Wow, there you have it, the naming of the town of Danville, Kentucky.

The cover of "KEN - TAH - THE "..., is shown above. It is from this text that the information for this post is taken. Detailed references are given in the text. This text was written after several years of research into the naming of Danville, KY.