It was December 1961 when this booklet first appeared.  Just looking forward to my 10th Christmas on this earth it was.  Opening packages, playing with those new toys, eating all those goodies, and seeing all those first cousins only comes around once a year.  A 10th year Christmas present arrived as shown: 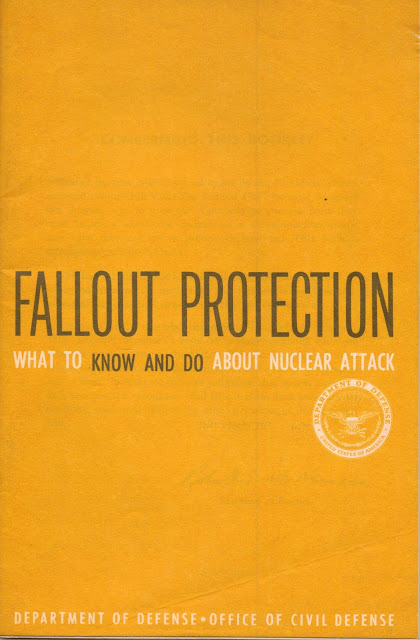 Of course this was not for me, it was special reading for all those folks responsible for me.  It states:

"The purpose of this booklet is to help save lives if a nuclear attack should ever come to America."

Are you kidding me!  "Duck and Cover"...was the exercise  we practiced during those school days.  It was kind of fun to have the whole class standing and then trying to get your body under those single metal desks with the straight arm extensions.  Not sure what you were suppose  to cover...there was just room enough for most of the parts of my body... little alone putting your hands over your head.

"There is no panacea for protection from nuclear attack"  the booklet would go on to say.  "In a major attack upon our country, millions of people would be killed." was a wonderful thought on this Christmas.

Don't recall if it snowed that winter month of December 1961.  "Duck and Cover" was the theme.  For most of us ten year old, we did not realize that no one could survive a nuclear winter.
Posted by The Jones Genealogist at 7:07 AM No comments:

A Letter From The President

Most of the family gathered this past Thanksgiving to share, laugh, hug , remember, and eat...not necessarily in that order.  In a box under my Dad's bed was the following letter that had been stored from many years before.  A real addition to this Thanksgiving... 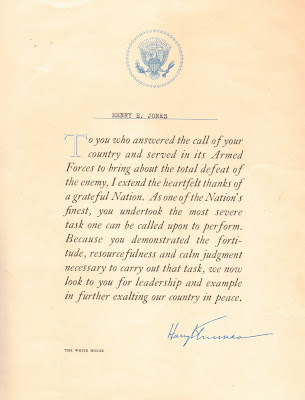 Posted by The Jones Genealogist at 7:28 AM No comments: