This post continues the description of the campaign medals awarded during WWII.  Known as "Theaters of War" the medal shown below represents the largest geographic area during the War, which included Asia, Australia, Alaska, the Pacific Islands, most of the Pacific Ocean, and the eastern half of the Indian Ocean.  It was know as "Asiatic-Pacific Campaign Medal". 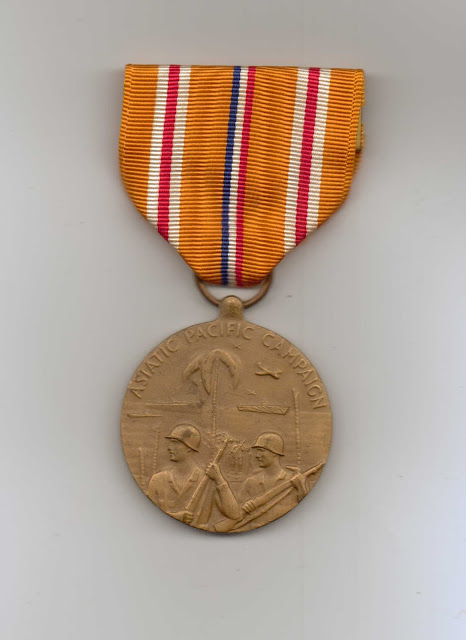 It was awarded for service between December 7, 1941, and March 2, 1946.  On the front side (obverse) the medal is designed to show an amphibious landing in the tropics, showing two helmeted soldiers holding rifles.  A leafed palm tree overshadowing a landing craft with disembarking troops is immediately in their background.  Three palm trees are shown without their palm leaves.   Further in the distance is depicted a battleship, an aircraft carrier, and a submarine with two aircraft flying overhead.  In a semicircle struck across the top are  the words  ASIATIC PACIFIC CAMPAIGN.

The back side is shown below which is identical to the European-African-Middle Eastern Theater Campaign shown last post [a bald eagle perched on a rock with the dates 1941 - 1945, and the words UNITED STATES OF AMERICA.] 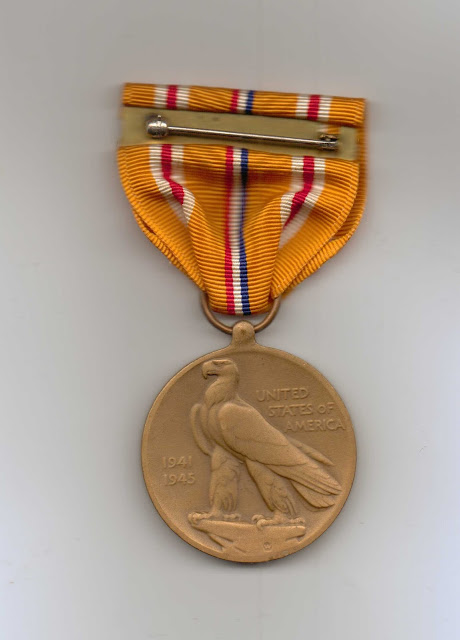 The Call of Duty : Military Awards And Decorations Of The United States of America, by John E. Strandberg and Rober James Bender, p.207.
Posted by The Jones Genealogist at 7:42 AM No comments:

Summer's ended, school begins, and a lot of folks spend their time attending this adventure.  Writing this post brought all kinds memories of my own attendance to this endeavor.  Let's see...starting at age 6, one begins this trail along life's pathway.  Starting mighty young it is.  Anyway, you become locked into a pathway that seems to go on, and on, and on.  Counting for me, it would be 7 years elementary, 1 year junior high, 4 years high school,  3 years college, 4 years medical school, 3 years residency, and another 2 years in fellowship.  Hum... that is almost quarter of a century, and more than 1/3 of my present years.  No wonder that seeing the following picture of a grandson spending some of his summer days prior to his own adventures along this pathway. 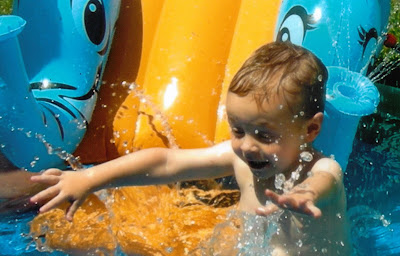 ...only two words come to mind...splish splash.
Posted by The Jones Genealogist at 6:47 AM No comments: