Once the Pilot/Co-Pilot got the bomber into the sky, and the Navigator got the plan where it was assigned to attack, the Bombardier was to get the pay load onto the target.  The wings shown is that of the fellow who took control of the plan to get the bombs on target. 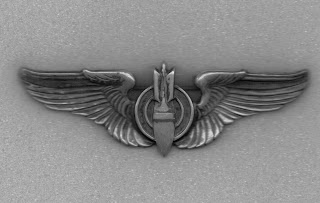 A bomb heading downward in the middle of the view finder.  Bombs away!

Posted by The Jones Genealogist at 11:17 AM No comments:

The role of the pilot was to get the plane off the ground and into the air. [wings shown last post]  Once airborne, the navigator was to get them where they were assigned.  The wings worn by the one who controlled the course of the plain is shown below. 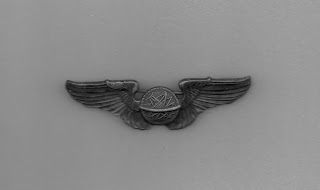 There was a special symbol placed in the center of the wings.  It seems to have been the symbol of a gyrocompass of sorts.  This was a compass consisting of a continuously driven gyroscope whose spinning axis is confined to a horizontal plane so that the earth's rotation causes it to assume a position parallel to the earth's axis and thus point to the true north.  True north indeed it is. 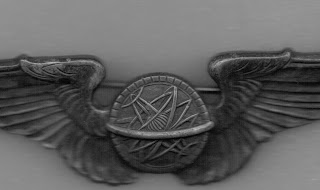 Are there any folks out there who might be able to better explain this symbol and its meaning?
Posted by The Jones Genealogist at 6:11 AM No comments: