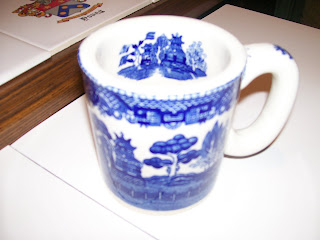 Having coffee and cinnamon toast with Mam maw Jones was the main source for many of my JONES family stories. The coffee cup she would place before me was truly unique. It was blue on a white background, and seemed to be telling a story. Starting at the place where the handle of the cup inserts, there was depicted, a small, single story house, like a poor man's house. From this little house, crossing an arched bridge, three small figures appeared to be heading to a much larger land mass. This land mass spread around the rest of the cup, above a fancy looking fence that seemed to dance in the foreground. Turning the cup, you left the three fellows and passed under two birds that appeared to be kissing. (I never quite figured out what they were doing in my story). The figures appeared to be carrying tools over their shoulders, but for many years I thought the last little fellow had a knapsack strung over his. In the watery background was a small ship which I thought must have brought these guys to shore from a land far far away. On along, there was a funny looking tree with what appeared to be feathers as branches. It was not like any cherry, apple, pear, or walnut tree that I had ever seen. Next there were two fancy looking three-story houses with funny caps and shapes along the roof line. These houses had multiple trees and small hills surrounding them giving the impression that this was certainly the place you would want to be if you lived in this cup.

The most amazing thing was that when you tilted the cup up to drink, the two big houses appeared on the inside of the cup. The funny looking tree was there too. I could look on the outside and the inside, and see the story. Wow, who ever thought of drawing inside a cup? The rim of the cup was bordered by some sort of mysterious shapes and markings. Another doodler I thought. My kind of cup.

The stories still come through this cup. To Mam maw I am thankful for the coffee and toast...and to being sworn to secrecy, that is all I can say.

For an account of my coffee and toast see the blog: Sworn to Secrecy. The above picture is of this cup and the memories it still contains.
Posted by The Jones Genealogist at 12:50 PM